Hindus from all over the world

In Adelaide there are Hindu devotees that have arrived in Australia from 9 different countries and all states of India. Our Shri Ganesha Temple accommodates them all, with their varying festivals, rites and rituals. All are welcome under Ganesha’s umbrella.

Guidelines for Visiting the Temple

When you come to the Temple, be respectful of all of our Gods and Goddesses. Bring your problems, prayers and sorrows but leave food and improper manners outside. Do not sit with your feet pointing toward the Deities or another person. Refrain from gossip and worldly talk. Mute your cell phone. Keep silence in the main Temple area. Treat the priests with respect and obey visitor signs. Avoid hugging and other demonstrations of affection. Enjoy a spiritual time in this holy sanctuary.

A reminder that Covid and related infectious diseases are still in the community. We kindly request that you keep our priests, other devotees and yourself safe by social distancing and hygiene practices. We encourage you to wear a mask. Please respect any directions from our Priests and Committee members.

When we visit a Hindu Temple to worship, we enter a sacred space where we are in the presence of the Gods. In the same way that we take care to dress well for other important occasions, we ask that you pay attention to your dress when visiting our Temple. Please do not offend, upset or distract others with your attire.

Footwear: Please place them tidily on the racks provided. 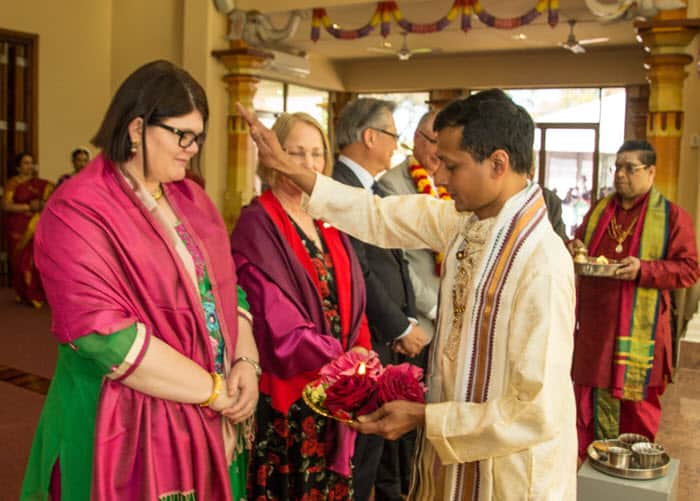 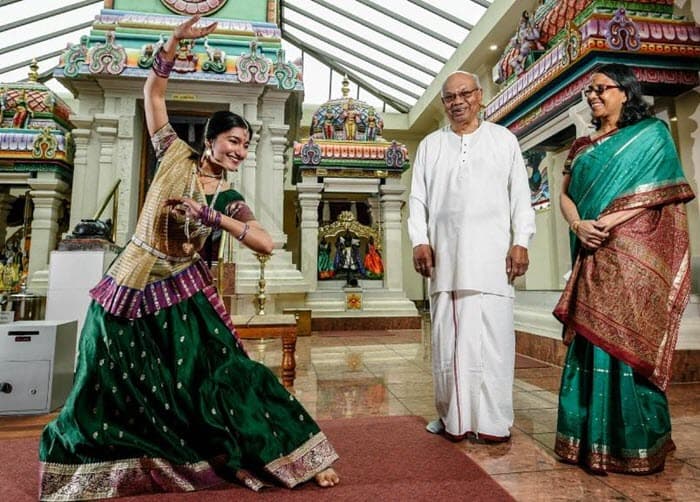 If you are new to a Hindu Temple, it will be helpful to know that shoes are removed prior to entering the temple. Shoe racks are provided, please place your shoes tidily on the racks. Socks may be worn inside, and bare feet are also permitted.

It is tradition in Hindu temples for men to move to the left in front of a deity or in the main area, and women to the right. In this way, distractions are limited, and devotees can focus on the spiritual intention of their visit. In our Temple it is common for some families to stay together, while others observe the practice of sitting or standing on the left and right.

What Happens in the Temple?

Our main Deities are in distinct, prominent sanctums. Devotees come and go during opening hours and worship privately or as a family, visiting the shrines of their favourite deities. Some but not all stay for Puja, the twice daily time for a structured ritual conducted by our priests. Occasionally this is followed by a talk, or a lecture by a Swami or other Hindu leader, and devotional singing or chanting.

What is a Puja?

The Hindu worship service called puja, literally “adoration,” is the central activity in most temples. Conducted by a priest, or pujari, puja is similar to a grand reception for a king. The ritual can last from ten minutes to several hours.

All pujas follow a basic pattern. First, the pujari purifies himself, the sacred implements and the place of worship. He chants in Sanskrit the time, place and nature of this particular puja. Through hand gestures (mudras) and mantras, he beseeches the Deity to come and dwell in the image. Ringing a bell and intoning mantras and hymns from the ancient Vedas and Agamas (scriptures), the pujari then offers precious substances to the Deity, including water, uncooked rice, holy ash, sandalwood paste and kumkum. Some rites include a ritual bath, called abhishekam, in which water, sesame oil, turmeric water, saffron, milk, yogurt, ghee, honey, lime juice, vibhuti, sandalwood paste, panchamritam (mixture of five fruits), coconut water and/or rosewater are poured over the Deity.

Devotees are seated during most of the puja, usually on the floor. After abhishekam, the Deity is dressed in new clothes and beautifully decorated with flowers. At this point, devotees may sing devotional songs. After decorating the Deity, the priest offers incense, oil lamps and food. He offers flowers while chanting 108 names of the God. At the high point of the puja, a large lamp is waved before the Deity and bells are rung loudly as God sends His power through the holy image of Himself. When the lamp is lowered, devotees can prostrate to the Divine. The lamp is then carried out to bless the worshipers, who often leave a donation on the tray (or later in the temple offering box). Finally, depending on the tradition, sacraments such as sacred ash, blessed water, sandalwood paste, kumkum, fruit, sweets and flowers are passed out to bless those present. Devotees may then sit in meditation, basking in the blessings invoked by the puja. 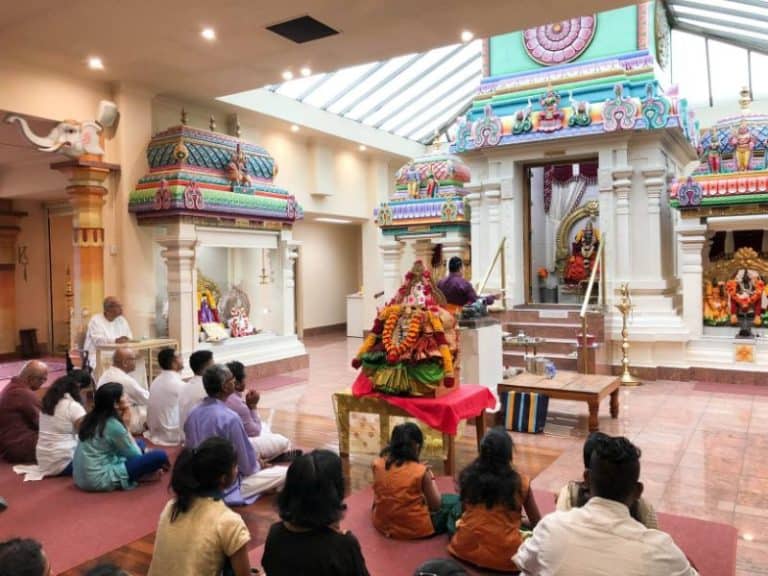 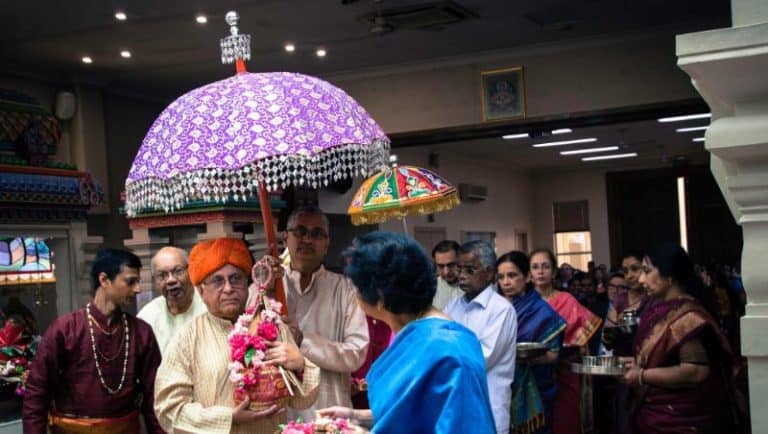 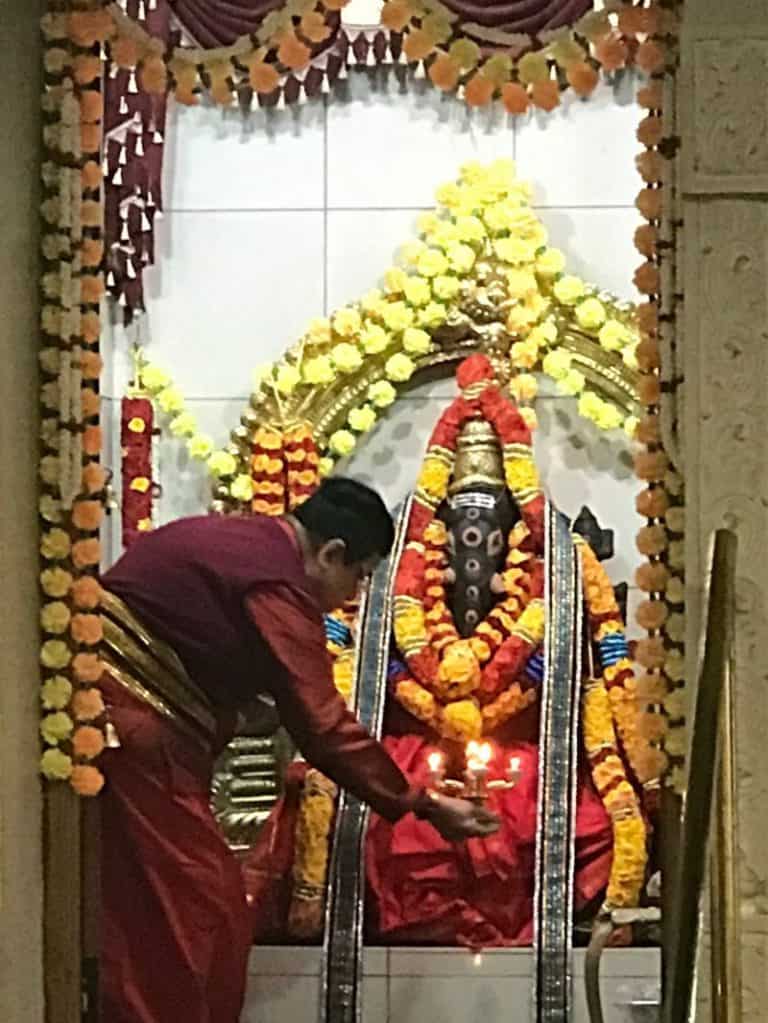 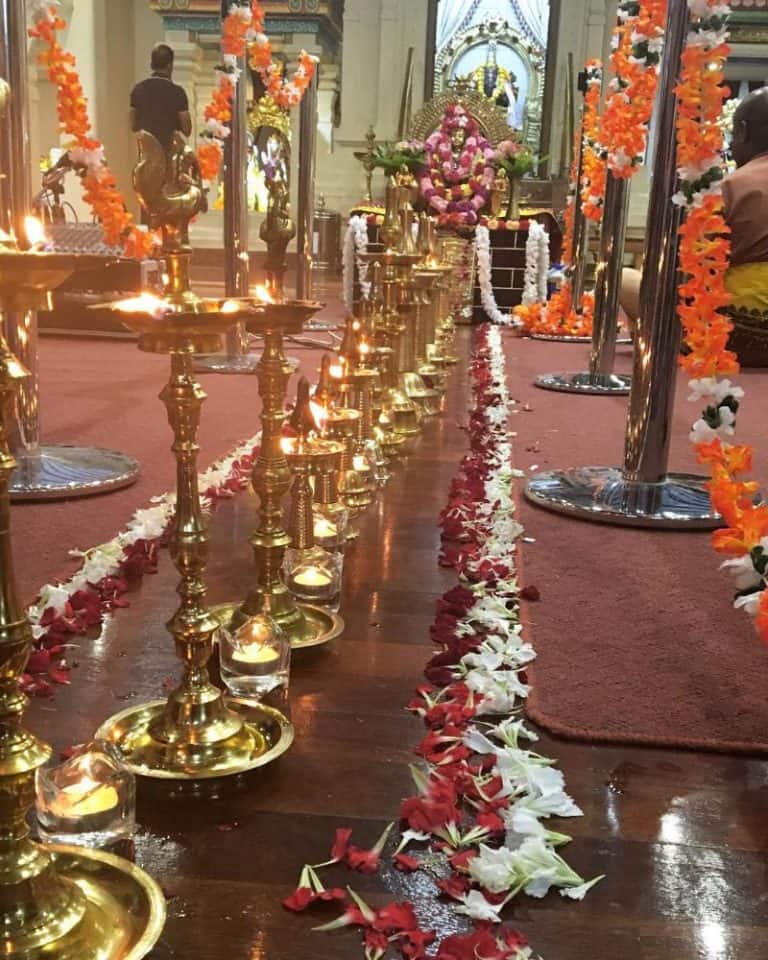 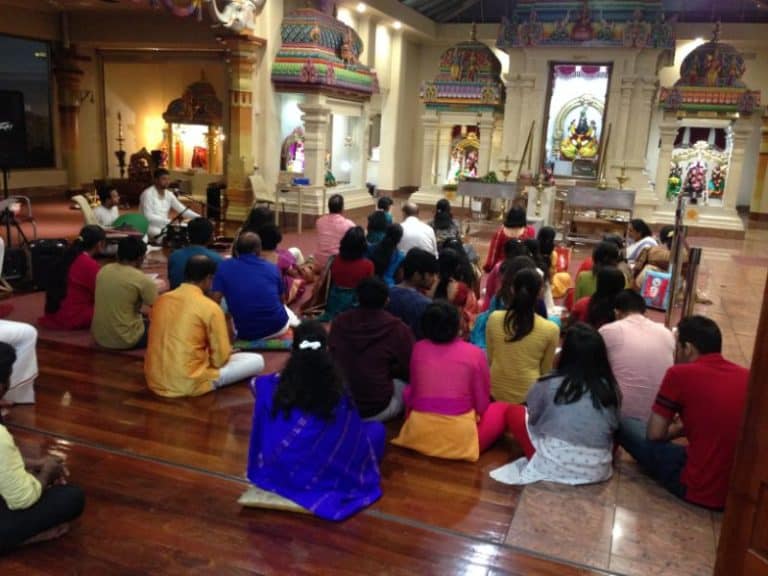 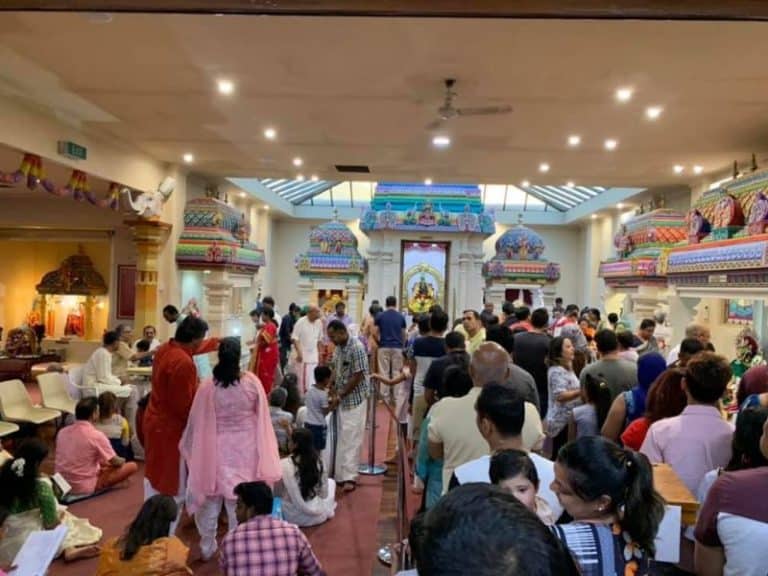