Meet the 2021 – 2022 Executive Committee of the Hindu Society of South Australia. The Committee, under the guidance of its President and together with its Volunteer community, manage the Shri Ganesha Temple and Community Cultural Centre. They also plan, organise and deliver a huge range of activities and events.

One of their chief tasks is to ensure the viability and sustainability of HSSA into the future. Committee members serve for terms of 2 years or more, and are elected at the AGM. 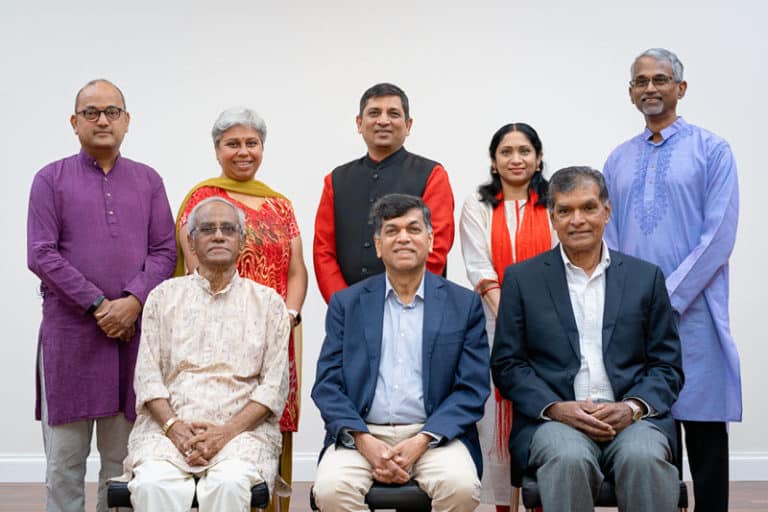 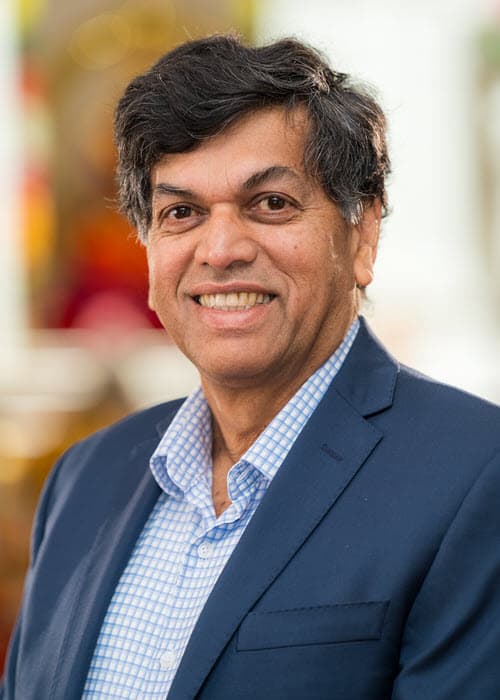 “It is such a privilege and pleasure for me to work for an organisation that is so committed to preserve and foster the Hindu way of life, philosophy, and practices. Promoting and understanding of Hinduism is truly at the heart of everything we do every day.”

Since he migrated to Adelaide 25 years ago with his family, Madhava has been associated with the Hindu Society of SA and the Shri Ganesha Temple.  He has served on the HSSA executive committee for over 7 years since 2013.  During this period, he has been a member of the executive team and the Secretary. He was elected to the position of President in 2020. In 2016 he oversaw the amendment of HSSA constitution. He is passionate about making changes in HSSA’s governance and practices that results in improved transparency and accountability.  He has assisted in organising several functions and charity events.

Currently Madhava holds the position of Chief Physicist at GenesisCare. Madhava is responsible for the management, development, and scientific direction of the radiation oncology medical physics services. He has trained several physicists to achieve certification in Radiation Oncology Medical Physics.

He held the position of Chairman of the Radiation Oncology Accreditation Panel of the Australasian College of Physical Scientists & Engineers in Medicine (ACPSEM) from 2011 to 2015. His research interests across several areas of radiation physics have led to the publication of several research papers in national and international journals. 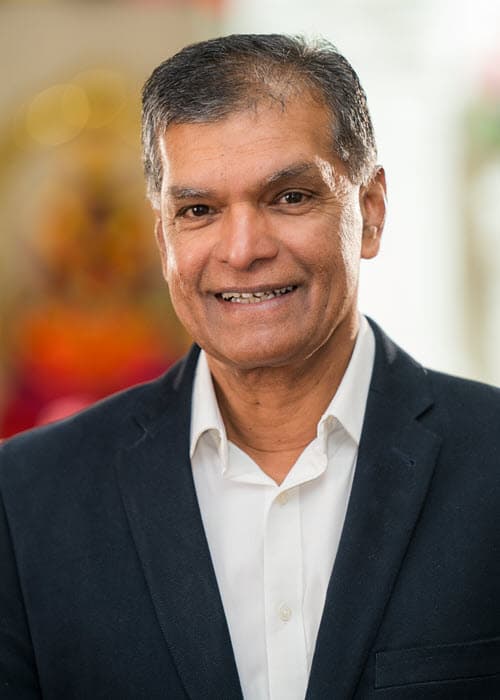 “It gives me great joy and satisfaction to serve in the HSSA Executive Committee and to help meet the spiritual, social and emotional needs of our devotees. I am passionate about ensuring that our community-funded temple is financially well-managed. This would support the upkeep of the Temple and implementation of new initiatives to benefit the community.”

Rajah has been a member of the HSSA Committee since 2015. He started a youth group soon after joining the committee and has been instrumental in developing various financial improvement measures. In December 2020 he was elected as Treasurer and hopes to further contribute his expertise to benefit the temple and the community.

Rajah is an international financial consultant and advises the Asian Development Bank, private sector companies and governments in over 20 countries. He regularly plays tennis and bridge and tutors maths to needy children. 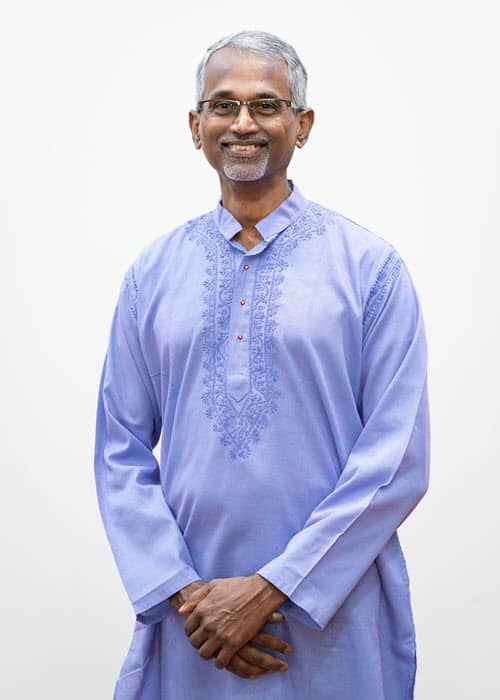 “I feel blessed to be part of the executive committee and serve the wider Hindu community. I am committed to continuous improvement and looking forward to contributing and adding value to the temple administration”.

Having been born and lived very close to Meenakshi Amman temple in Madurai, Arasu still remembers going to the temple with his mother during the months of ‘Marghazi’ for many years. Those vivid memories of going to Meenakshi temple are recalled whenever he visits Shri Ganesha temple as a devotee and a volunteer.

Arasu has a Mechanical Engineering background and has further studied in many other subjects (Information Systems, Operations & Practice Management). After working for a few years in India, Arasu with his family migrated to New Zealand and lived in Auckland for about 5 years. Since he moved and settled in Adelaide in 2001 he has been going to Shri Ganesha temple. Throughout the working life – spanning 37 years, he has managed and completed many projects resulting in cost saving and process improvements for the different companies he worked for. Currently with CSR Gyprock as their Inventory Coordinator. 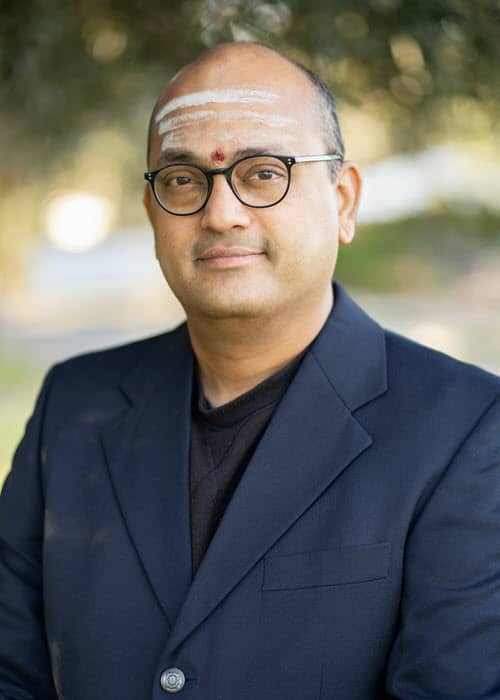 “It is my privilege to be associated with HSSA, an organisation that upholds the values of Sanathana Dharma and the ancient Vedic Culture. I look forward to serving the community through Seva as enshrined in Hindu Dharma Shastras.”

Raghu joined the HSSA Executive Committee in April, 2021. He has been conducting Veda classes under the banner of Vedic and Cultural Centre of Australia for the HSSA, and is assisting with maintaining the books of account. He has also recently taken up editorship of the HSSA Newsletter, Turiya Marga.

Raghu is a CA & CPA, is the CFO of a Pharmacy group and runs his own accounting practice. He has been trained in Veda chanting from a young age by his father and several Gurus. He is on the Governing council of his daughter’s school and volunteers for his local footy club and Blind Cricket SA. 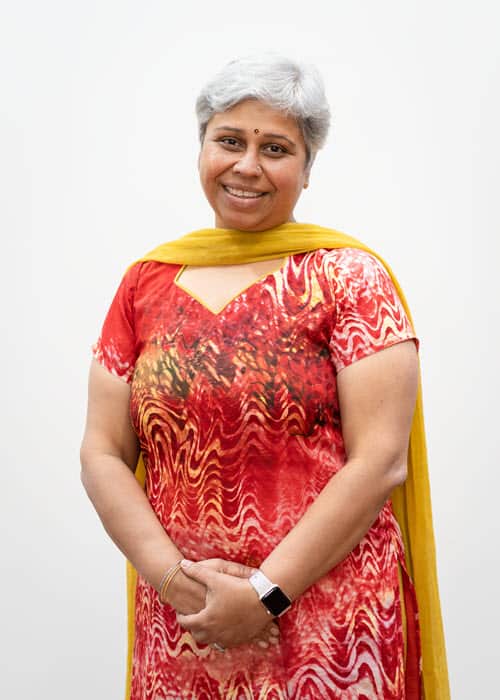 “I was humbled and filled with gratitude when the opportunity to serve as an HSSA committee member was presented as it is a divine blessing to be of sewa to the temple’s community. – not a privilege. Personally, I see a temple not only as a place for religious and spiritual worship, but also an abode that provides sanctuary for social and cultural activities to help form connection, a sense of belonging and identity to our devotees. Holding this tenet in mind, I will strive to ensure that each devotee’s journey and relationship to our temple is honoured”

Rakhvinder joined the HSSA committee in November 2021. Prior to this she was involved in various volunteer roles in the temple – with the intention of giving something back to the community and making a difference to the people around.

Rakhvinder started her teaching career internationally in 2000 and in South Australia since 2010. Besides being an educator, she is involved with various migrant groups providing support to new migrants, the Red Cross organisation as a volunteer and has been a committee member of a South Australian based Welfare Club since 2019. 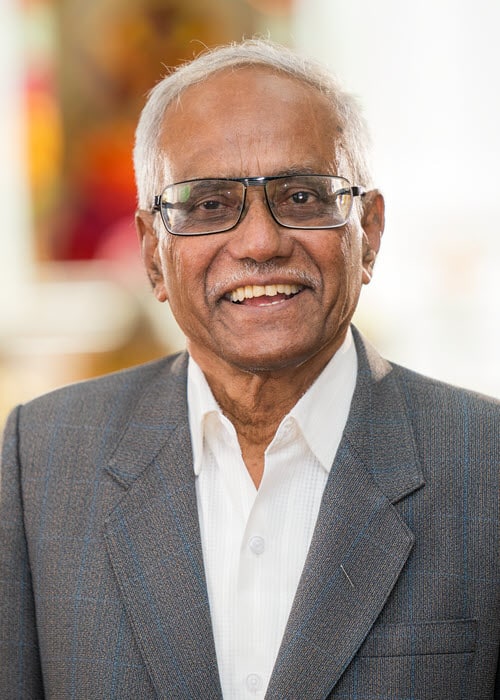 “After settling in Adelaide in 1998 we visited the Shri Ganesha Temple and were amazed to find nice groups of devotees fully committed to the welfare of the Temple. Their selfless devotion and sincerity were of a very high order. This stimulated me to join the Hindu Society SA Committee after my retirement as a specialist Histopathologist. Through this forum I promote the essence of our beautiful, most flexible and tolerant religion of the world, HINDUISM, in its right spirit.”

Swapna has helped in the decision-making process of the Committee and volunteered for the smooth running of all major Temple festivals since 2018. He has been instrumental in making our newsletter, Turiya Marga, more attractive with valuable suggestions. He has compiled a document on Brief Facets of Hinduism as an ongoing publication. He plans to progress Siva Selva’s wish for a smaller Gopuram on the west gate in memory of him and for further beautification of the Temple.

Swapna was born and brought up in an orthodox Hindu family of Kolkata. His tertiary education in a noble profession helped him to view life from a different perspective. He would visit places of worship and attend spiritual discourses, mostly of the Vedanta Society. Gradually he fully embraced Hinduism as the path of spiritual realization. 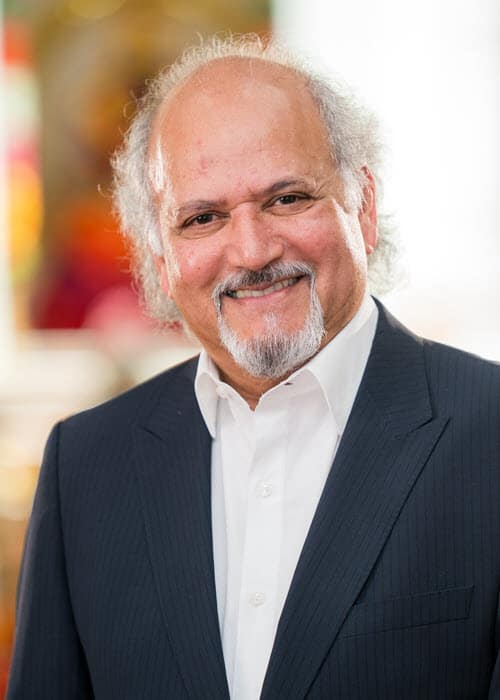 “I feel fortunate to be associated with the Hindu Society of South Australia from its inception some 35 years ago. From its humble beginnings I have been closely connected with its progressive milestones to-date. HSSA has been a conduit for my emotional and spiritual attachment to Shri Ganesha Temple. The Temple has offered me opportunities to meet Hindu Devotees from across the world and develop symbiotic relationships socially and spiritually.”

As a founding life member of HSSA, Dilip has been associated with organising religious events such as Celebration of Maha Ganesha Chaturthi, participate in annual fund-raising activities and in spiritual journeys through group recitals and Bhajans. He believes passionately in building harmonious bonds between people of different cultures, backgrounds, religions and across all layers of the society. He cares deeply about advocating for a multi-cultural Australia and multi-faith communities. He has been a member of the HSSA Executive Committee since 2021 and manages the Volunteers portfolio. He has also been appointed as HSSA’s Public Officer.

Dilip is a retired Occupational Therapist and Rehabilitation Consultant. Adelaide has been his home since 1978. Professionally, he was passionately focused on improving the health outcomes for individuals who have suffered physical and mental injuries. He has served as President of the Indian Australian Association of SA, and as Chairman and Trustee of the Indian Education and Cultural Trust Fund. He is a Justice of the Peace, and provides volunteering services to the University of Adelaide and Burnside City Council. 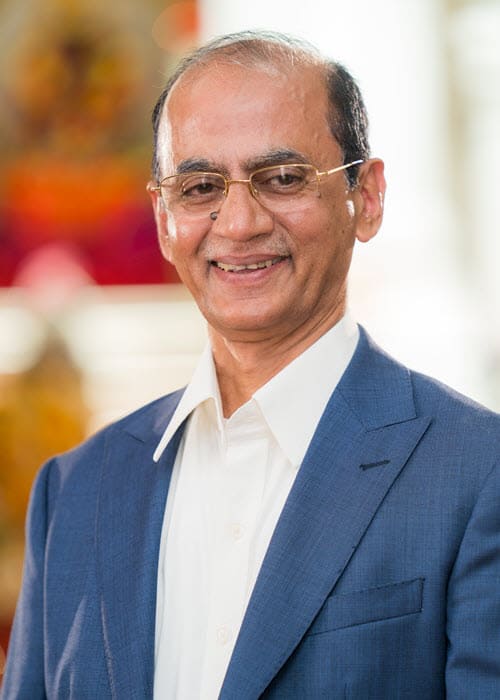 Sanjay looks forward to adding value to the work of the Committee. He has worked with different organisations for the last 15 years in Adelaide. He is one of the founder members of Adelaide Sarvajanik Ganeshotsav Samiti, and was the first Secretary of the ASGS from 2012 to 2015. Now he adds value to ASGS as a Senior Advisor. He was also a Secretary of Adelaide Marathi Mandal and actively involved in the Marathi Community.

Sanjay is a Mechanical Engineer and worked for Larsen & Toubro for 25yrs at Powai Plant, Mumbai. Now he works part time with an engineering company in Adelaide. 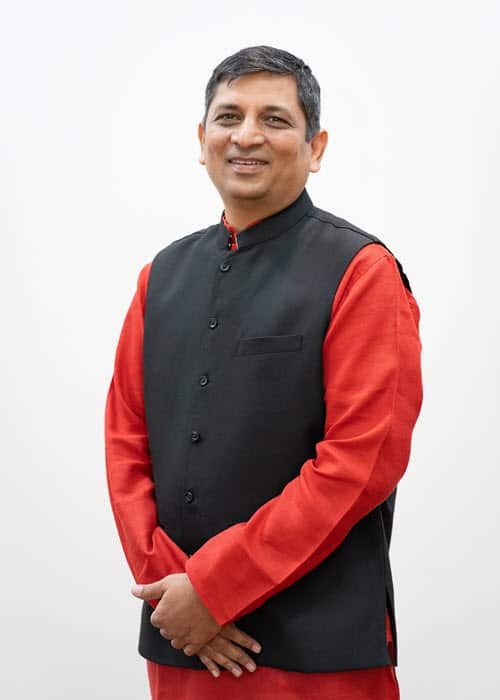 “Service to mankind is Service to God”. Swami Vivekananda has said, the gist of all worship is to be pure and to do good to others. That’s been the guiding principle for me throughout my life, and it is an honour to be able to continue this belief as a member of Hindu Society of South Australia.

As a devout follower of Lord Ganesha, Rakesh has been visiting the Shri Ganesh Temple every Tuesday, in continuation of his weekly visit to the Siddhi Vinayak Temple in Mumbai from where he migrated in 2014. He has taken over the responsibility to trouble shoot, maintain and further develop the social media and technology adoptions at the Temple.

Coming from a family of Rotarians (Service above Self), professionally, Rakesh is a Technical Specialist with Telstra, and has also been contributing to the local community as the General Secretary of United Indians of South Australia & founder of Indian Professionals in Australia. He continues to volunteer with various other organisations like the Flinders Cancer Foundation and Mental Health Foundation of Australia and strongly supports and mentors new migrants. 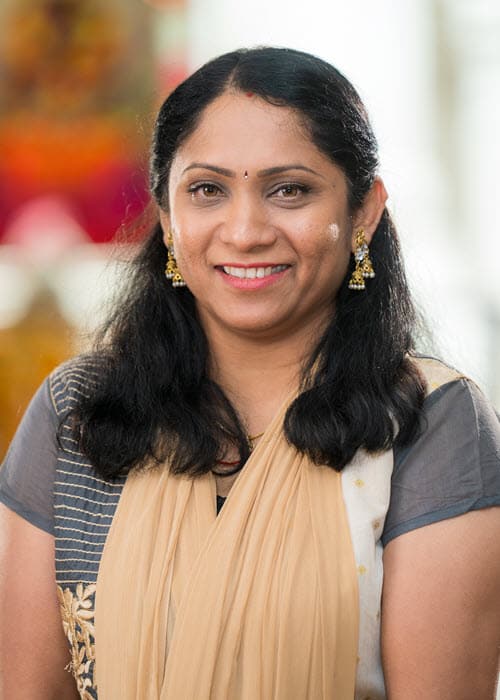 “It is a great privilege to serve our community in the HSSA Executive committee. We ensure that our culture and religion is sustained into the future of South Australia and help to build a better community environment. Being a part of the committee allows me to meet lots of new people within our community, while taking part in Temple functions and supporting our culture.”

Rubi became a member of the committee in 2021 and is eager to add her thoughts and to move forward in order to make an impact. She is looking forward to being involved in community services and being a reliable member. Overall, she is keen to support the rest of the committee members as well the community as a whole.

Rubi works in the admin department with E- Link Group, a telecom and construction company. She has done a lot of volunteer work at Shri Ganesh Temple and is always looking for an opportunity to help others.