Like most public organisations, the Hindu Society of South Australia and the Shri Ganesha Temple started from humble beginnings. The Temple has strong cultural and spiritual associations for the community and is significant as South Australia’s first traditional Hindu temple.

The Temple Complex with function centres, kitchens and a library, has become the centre point of Hindu worship in Adelaide and provides devotees with a place for spiritual activities, festival celebrations and cultural studies. The Temple building is now Heritage listed. It has been a journey of nearly half a century and had been accomplished with the dedication, generosity and hard work of so many people. 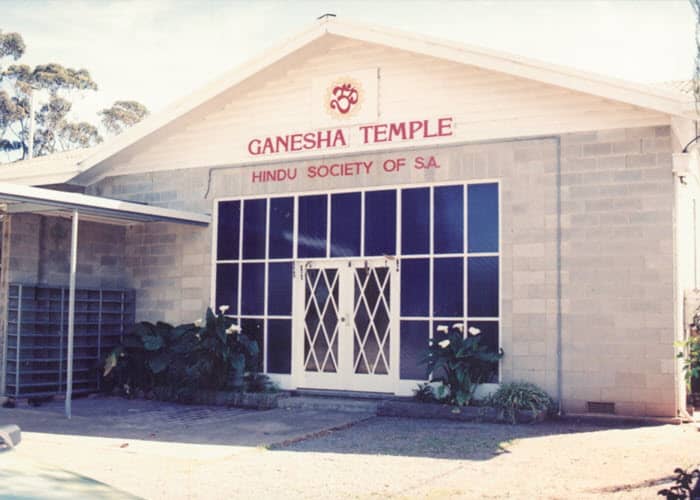 As early as the 1970’s the small Hindu community in Adelaide had the vision of a permanent Temple in Adelaide. Devotees were worshiping in each other’s homes. Volunteers such as Dr Ananth Rao (a Mathematics professor and scholar) and Mr Dilip Chirmuley (a university lecturer), both well versed in scriptures, took the role of Pujari on a rotational basis.

With the number of Hindu migrants increasing in Adelaide, the need for a common place of worship was increasingly felt. The Hindu Society of South Australia (HSSA) was formed, and just four months after its inception, a vacant Lutheran church hall in Marion, 15km south of the CBD, was purchased. It was a very basic single-storey cement brick building that would seat around 80, with a small office room. At one end the hall was a metre-high wooden platform that had a cross on it. The gravel car park outside had space for 10 vehicles. The Society opted for this austere building since it had no funds; any green field option was out of the question. Announcing its decision on the purchase at a meeting in November 1985, the Society received pledges for a third of the purchase price and the balance at the time of settlement two months later, with no need for borrowing. It was a remarkable feat. The local Hindu population might have been small but its enthusiasm was high enough to make Adelaide only the second city in Australia to have a temple.

Initially a framed picture of Ganesha adorned the platform at one end of the building; it still hangs on one of the walls and is fondly revered. Within six months of buying the building, a metre-high granite statue of Lord Ganesha – chosen as the primary deity as He is universally worshiped by all sections of the Hindu community – was donated and brought from Mahabalipuram in South India. The deity was installed on a concrete pedestal after a simple but authentic Prathishta ceremony in July 1986. It was witnessed by a full house. Lord Ganesha of the Shri Ganesha Temple is of the form of Siddhi Ganesha, the giver of success and an embodiment of masterly intellect. He is the epitome of achievement and self-mastery, and is also associated with bountiful harvests and general abundance in life.

Priest Sr Skandaraja Kurukkal from Malaysia was appointed as Chief Priest in June 1990. He has since served the community and the Temple for over 30 years, Since April 2008 he has been supported by a Junior Priest, Asohan Krishnaniyer. Both priests have extra ordinary skill in serving the needs of all Hindu groups and devotees from 10 countries. Initially due to the Temple having limited resources a few generous members undertook to fund the priest’s accommodation and other living expenses.

The next few years were mainly taken up in raising funds, primarily via an annual Diwali dinner. Mr Dilip Chirmuley and Dr Jagan Mazumdar, during their terms as President of HSSA, steadily moved the project along. In the general community, opinion was divided as to which of two proposed plans for the installation of additional deities should be adopted. Counselling was sought even from overseas experts including Satguru Subramaniya Swami from the Kauai Aadheenam and Prof. Kailasanathan from Jaffna University. One plan involved placing additional deities in a single file, whereas the other plan was to keep Ganesha at his present place and build shrines for the other deities.

With all the religious features of a temple in place and more migrants arriving, devotees started attending in larger numbers. On major festival days there was not enough space, and devotees had to stand outside to obtain darshan and partake of prasad. As the building was surrounded by houses on all three sides, there was no room to expand. It was proposed to build a temple at the car park, shifting the Murti there and converting the temple building to a hall. Moving the consecrated deity did not find favour with some sections. No solution could be found until 1992 when an opportunity arose to buy the backyard of an adjoining house, and it was taken up even though it cost as much as the original church building! It was only made possible thanks to a generous donor. A Social Hall was added to the Temple, providing additional space on crowded festival days, weddings and other events. An outdoor kitchen and dining area was also created in this space.

The latter plan was approved at a general meeting. By having deities specific to the major sections of the Hindu community, the Temple serves as a haven of harmony with each group taking ownership of major festivals of particular importance to them. Marble murtis are placed on one side of the Temple and granite murtis on the other, in line with the custom in North and South India, providing a unifying edifice. From then on things moved fast, with Dr Jagdish Saraf taking the reins in 1998 as President of HSSA, with good support from Mr. Siva Selvakulalingam as Vice-President and Dr. Janan Iswaran as a large-hearted donor. Siva Selvakulalingam became President in 2001 and remained in that role for 18 years, continually raising funds and guiding the development of the Temple. In early 2000, Sri Natarajan, a renowned Stapathi (Chief Temple Artisan) and six craftsmen arrived from India. The austere building’s transformation to what it is today is simply amazing! Working long hours and seven days a week they transformed an unassuming old building into a beautiful place of worship. Their accommodation and living expenses were borne by a generous donor. In November 2000 all the deities were installed according to Vedic scriptures and consecrated at a four-day Mahakumbabishekam ritual witnessed by thousands of devotees. An icon was born and a dream of all those noble souls involved since the mid-‘70s was fulfilled.

In 2012 Adelaide witnessed a huge 8-day spiritual spectacle in the first week of February when the city’s sky was reverberating to Vedic chants at the Temple’s Maha Kumbabishekam ceremony.

The Maha Kumbabishekam ceremony included the removal of idols from their pedestals and temporarily housing them in a different location. The Maha Kumbabishekam ceremony that brings the idols back their original prowess, involves elaborate rituals including the re-installation of the idols at their original pedestals after performing havans (fire rituals) in homa kunds (specially constructed three-tiered brick structures to hold the fire for four days). The ceremony concludes when holy water that has been kept in special pots near the havans is poured over the kumbhas atop the gopuram of the principle and other deities.

Two stapathis (temple artisans) from the same group that built the temple 12 years before were brought again to carry out the renovation work. They worked seven days a week for four months to complete the job in time for the ceremony. A dozen temple priests – local interstate and overseas – came to perform the rituals according to the shastras.

Major additions to the temple included incorporating the Hanuman shrine into the major part of the temple by widening its opening and finely decorating its shrine. The festival was held in front of thousands of devotees to reconsecrate the Temple and its deities.

Another important event happened that year. In May, 2012, HSSA was able to purchase an older adjoining property. The kitchen and outside dining area was expanded, and the house on the adjoining land was rented to families from within the community. But there were plans afoot to build a second, much larger hall, to cater for community functions and provide capacity for the largest of the many festivals celebrated each year.

Mr Siva Selva OAM gave 35 years of untiring service to the community through HSSA and the Shri Ganesha Temple, 18 of which were as President of the Executive Committee. In 2018, he called it a day and stepped down as President but continued to serve as Treasurer then Vice President. HSSA and Shri Ganesha Temple saw remarkable developments and achievements under his leadership including the fulfilment of the dream to build a Community Cultural Centre. He remained on the Committee until his passing in 2021.

A New Community Cultural Centre added to the Temple Complex

More than a religious place, the Temple has also served as a cultural centre by holding classes in Hindi and Tamil, classical dance performances, vedic chanting, meditation, yoga, spiritual satsangs, and more. Volunteers explain Hinduism principles to visiting groups from schools and service clubs. It has functioned as a social hub too, for new migrants to establish their network with people from their regions.
A new Cultural Community Centre, seating 250, was built on the adjoining land acquired in 2012. The Centre was completed in 2019, with a grant from the government and more generous donations. It is allowing the important functions of the Temple Complex to expand and providing for the ever-growing numbers of devotees and members of the community. 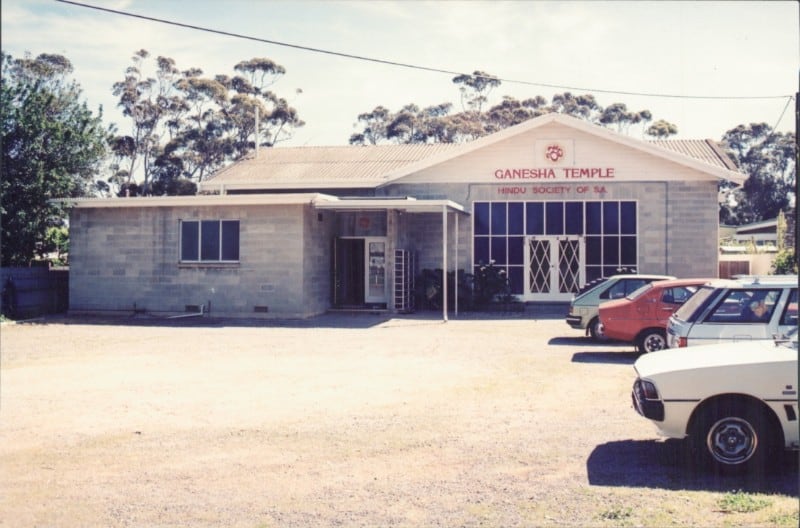 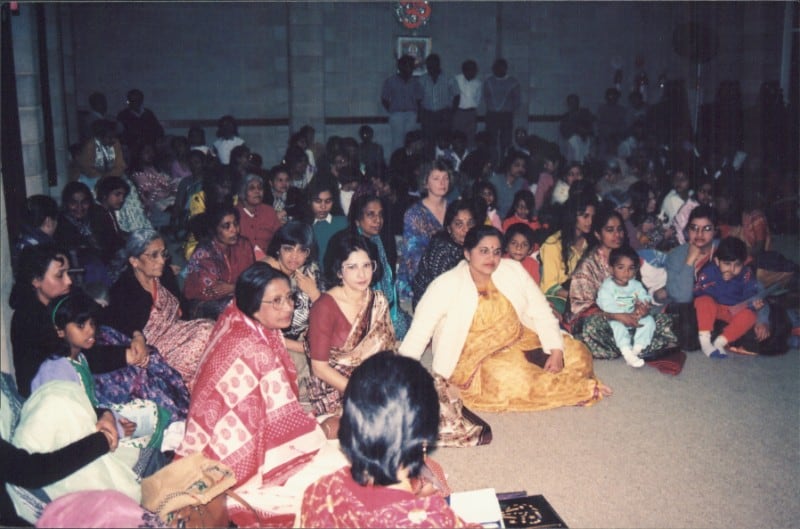 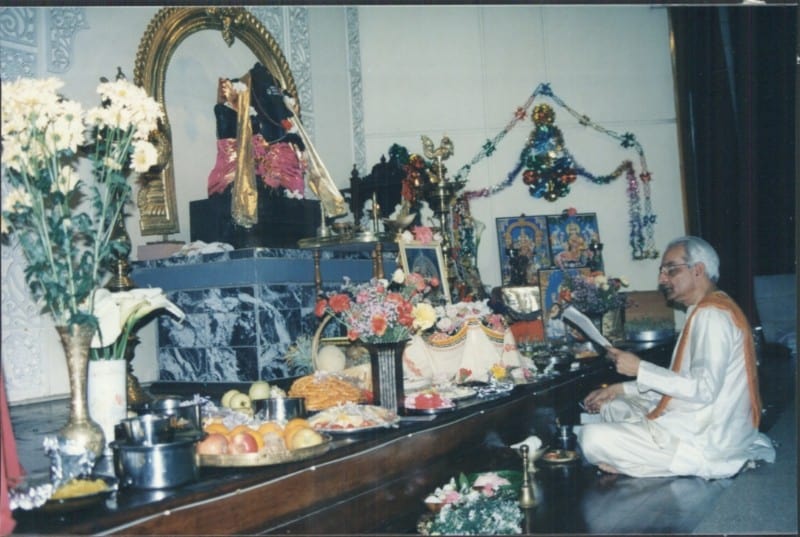 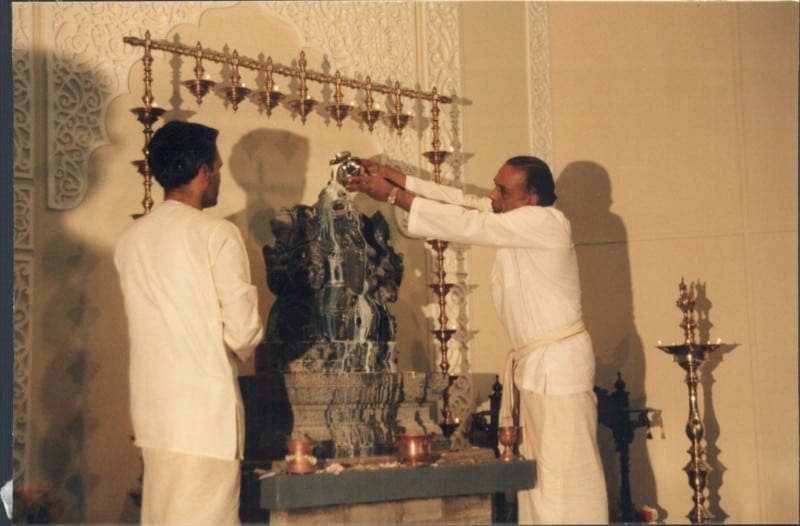 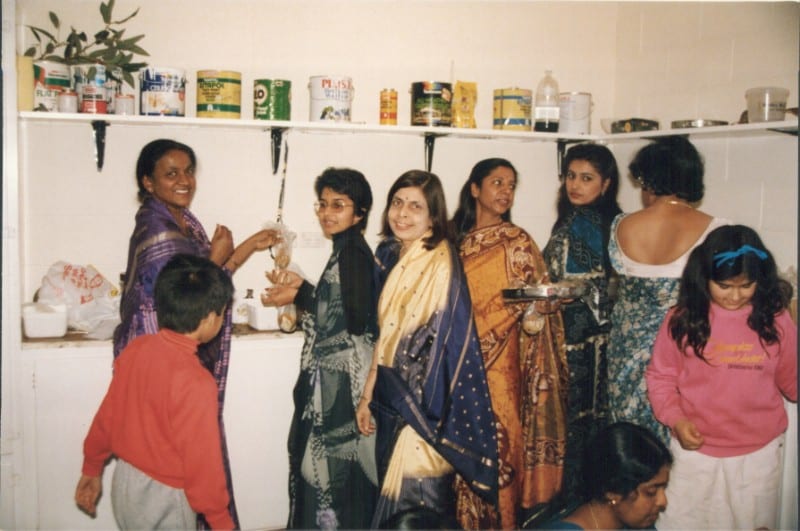 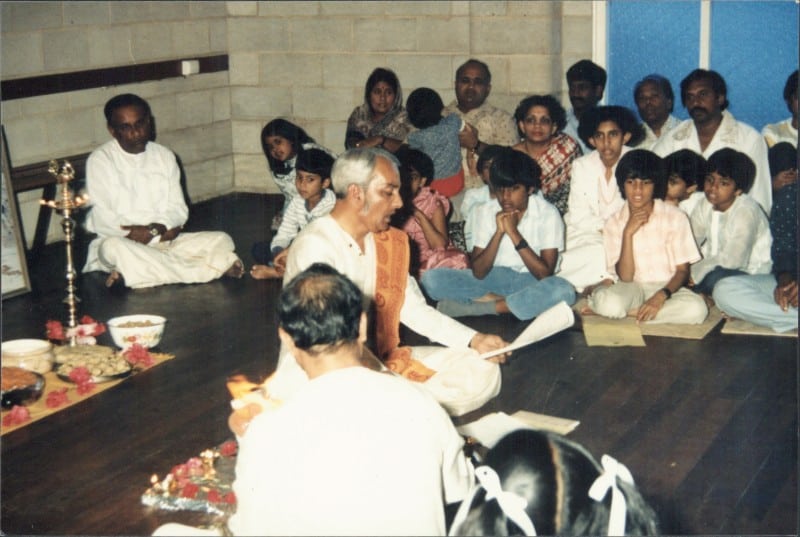 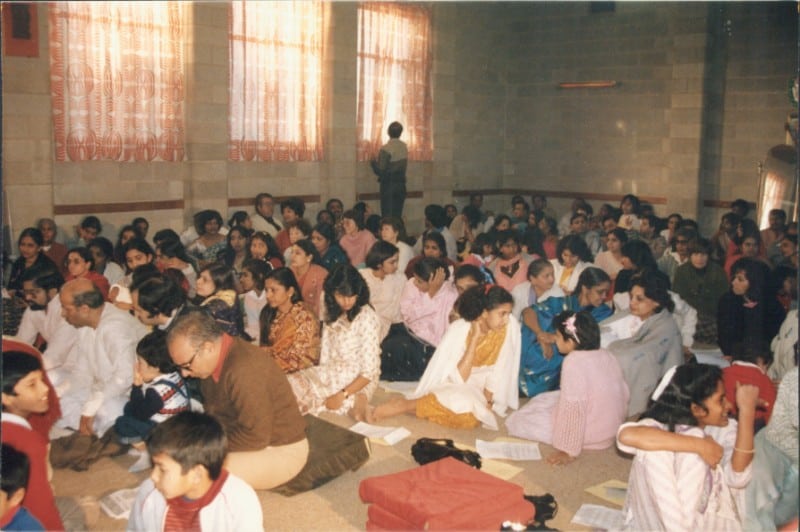 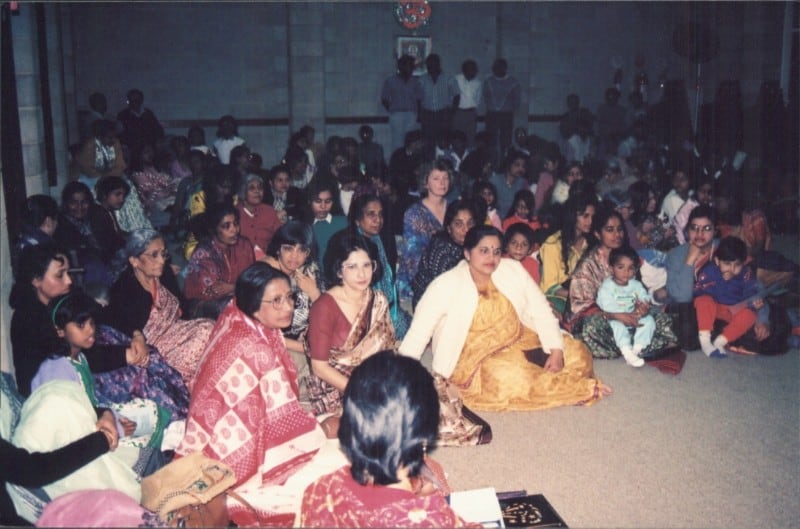 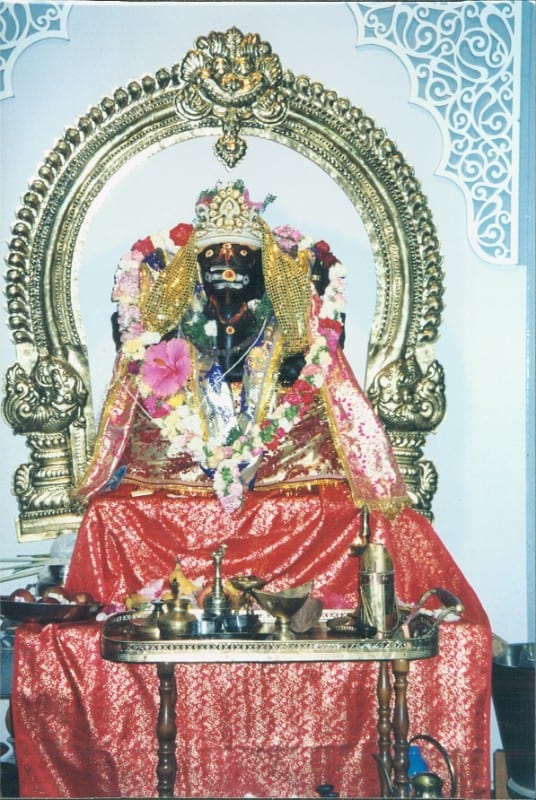 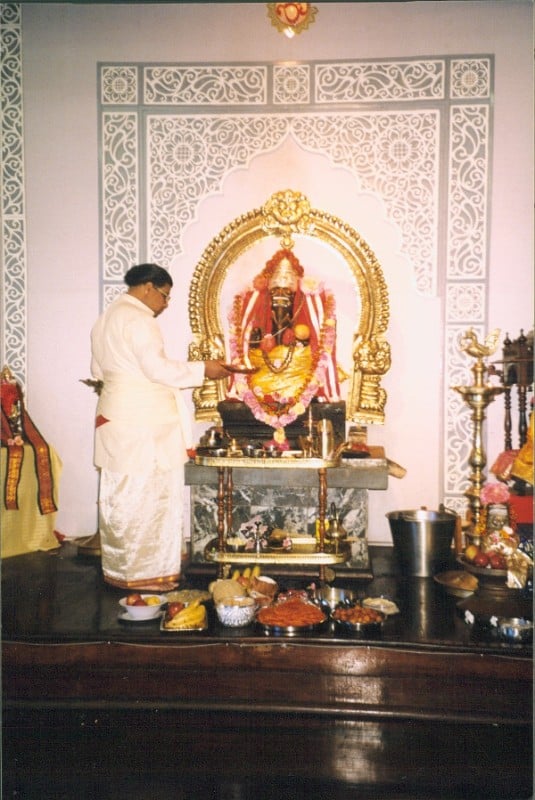 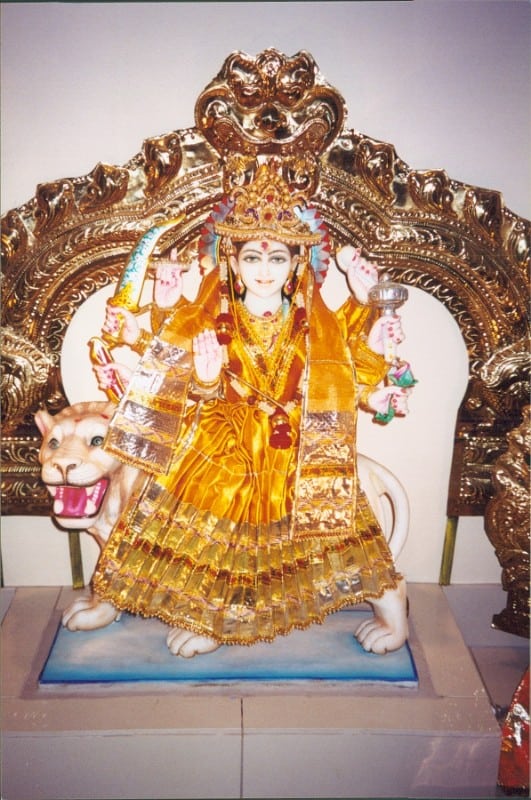 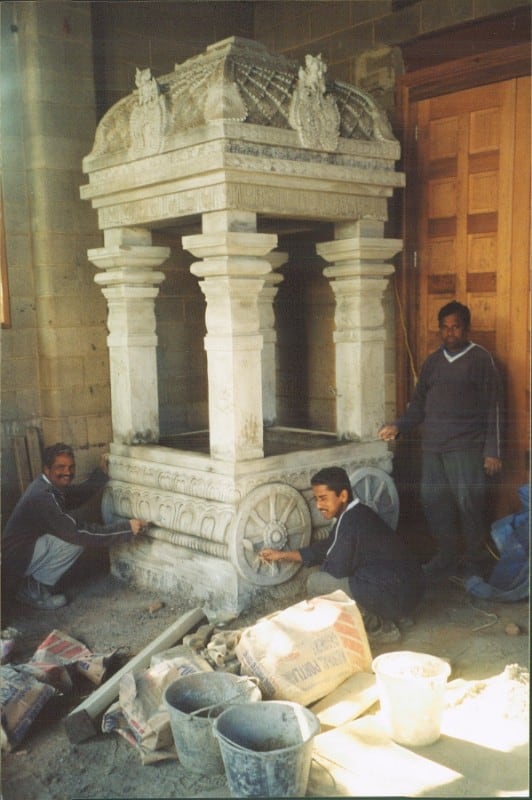 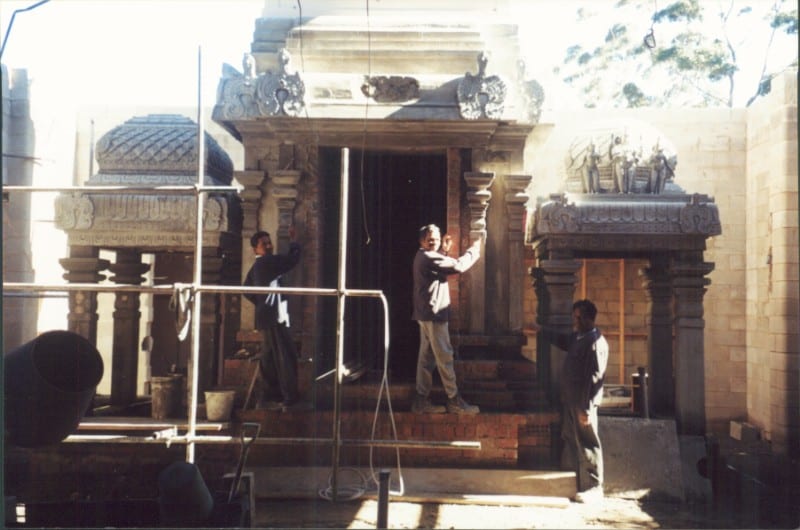 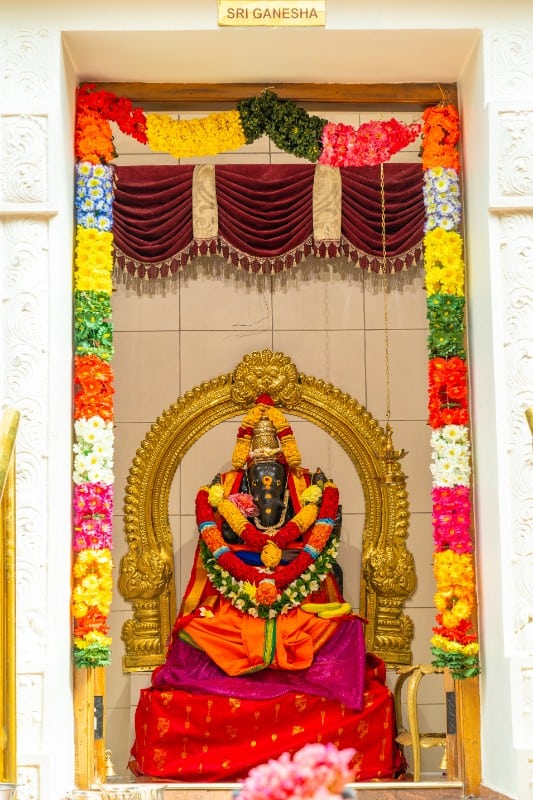 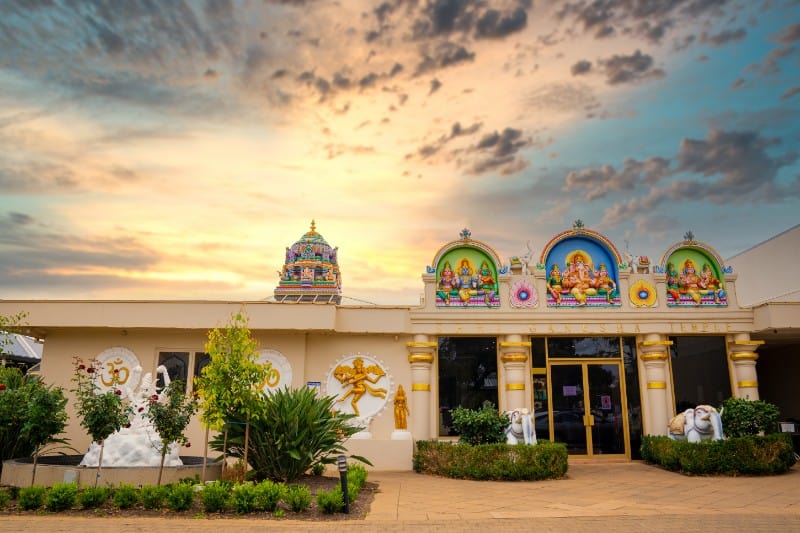 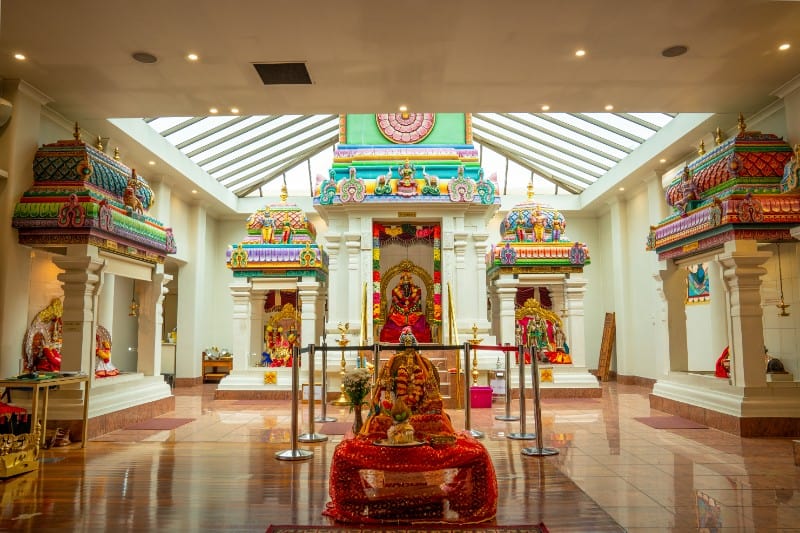 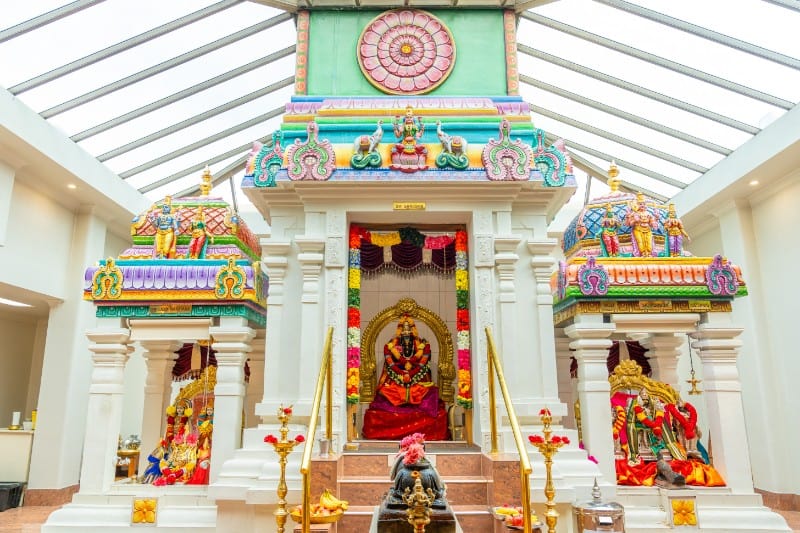